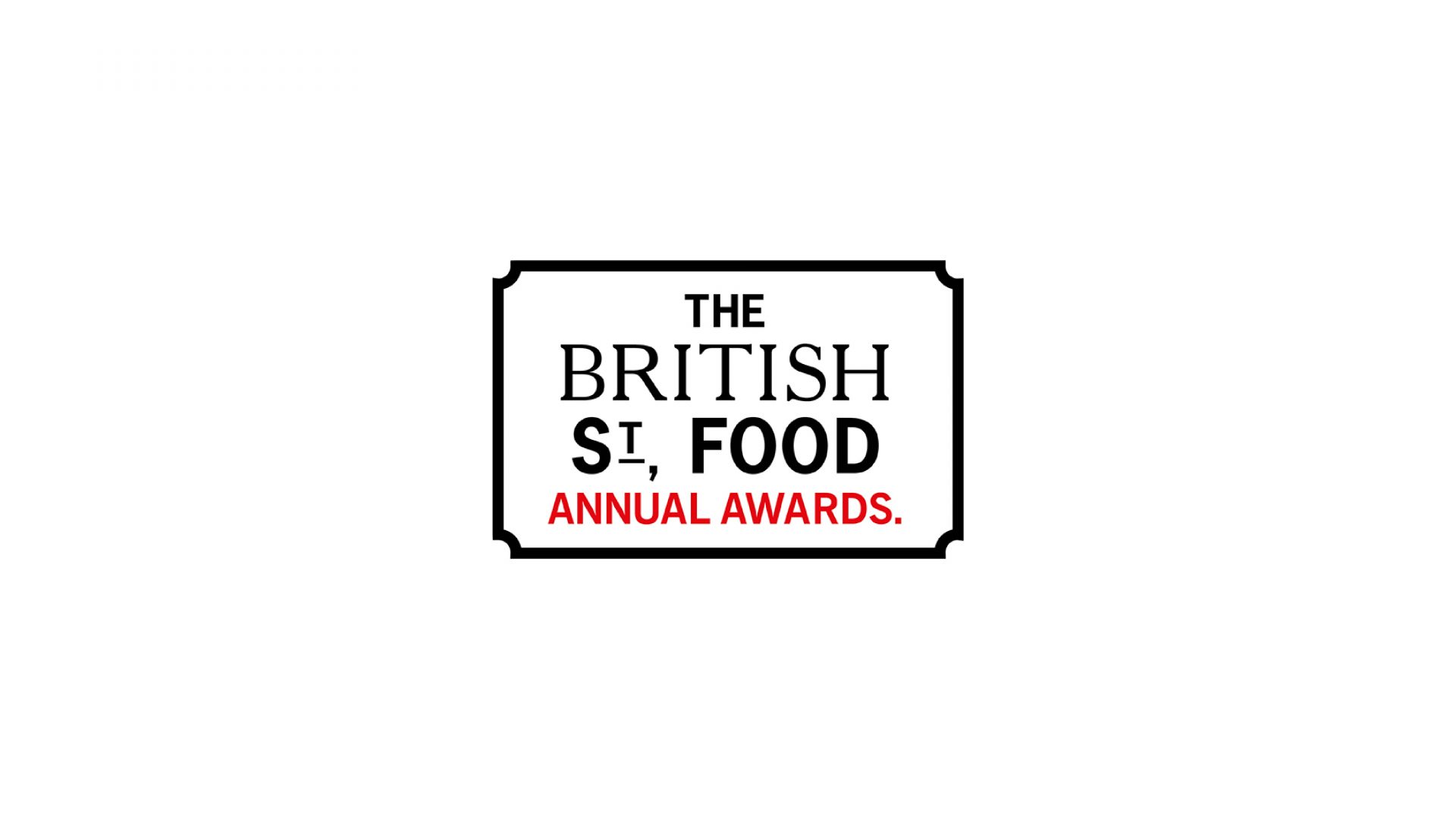 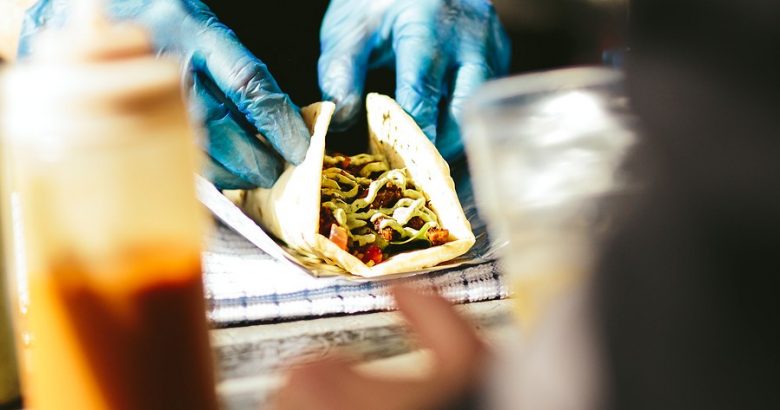 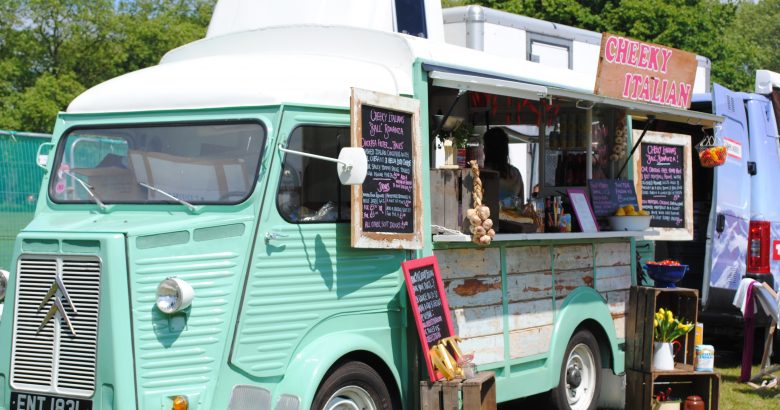 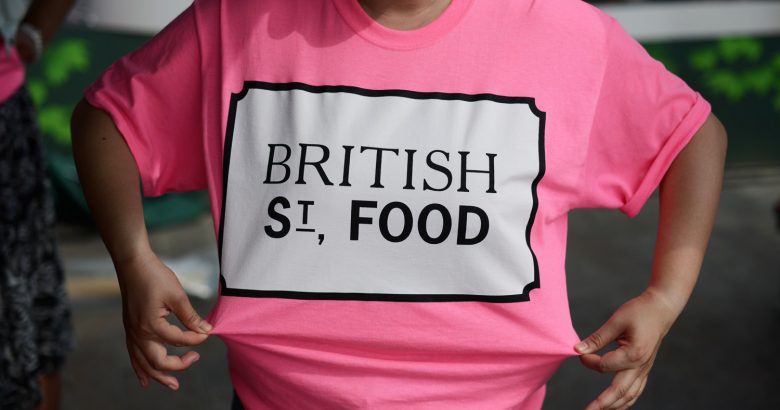 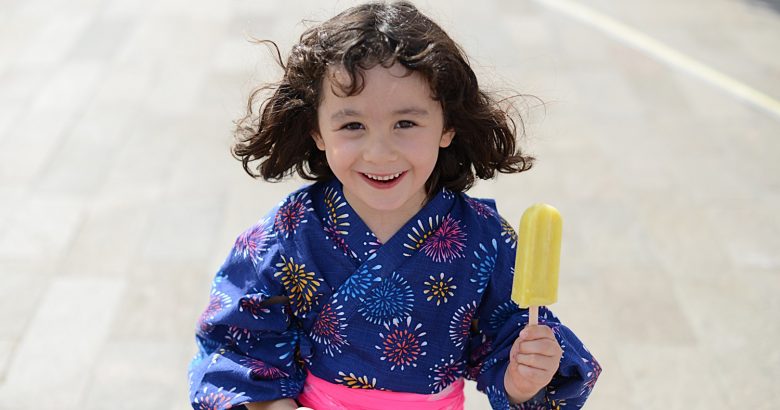 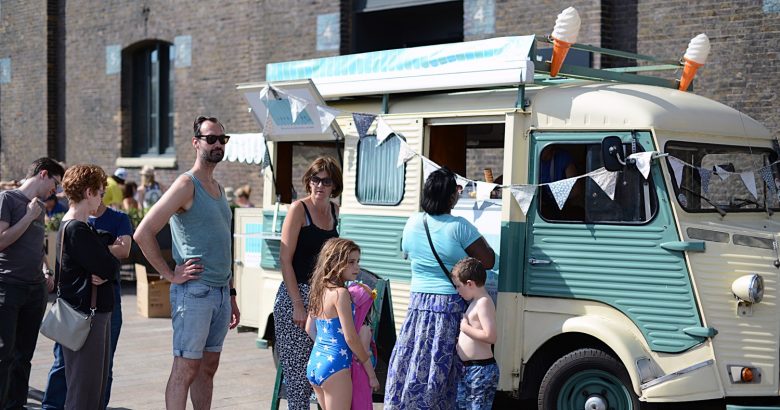 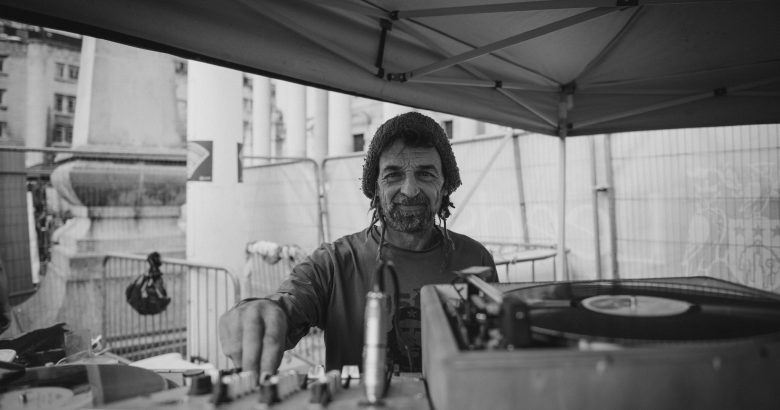 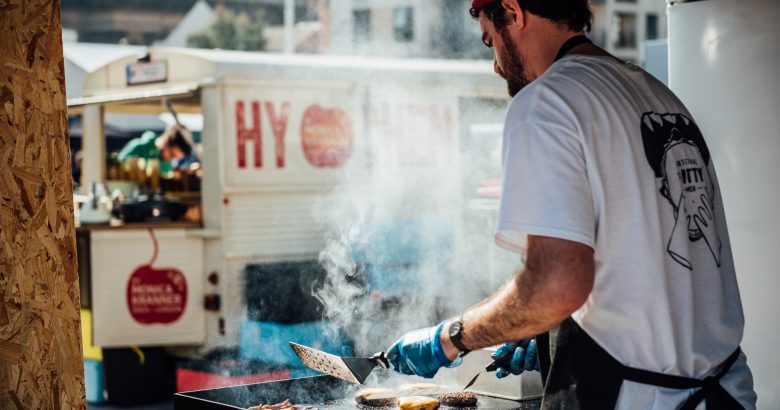 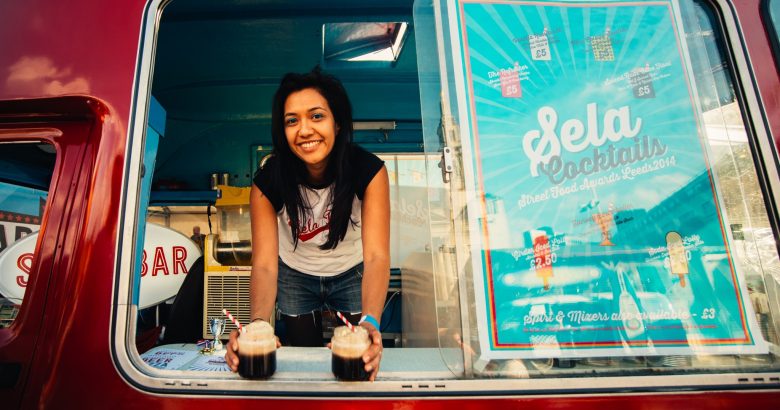 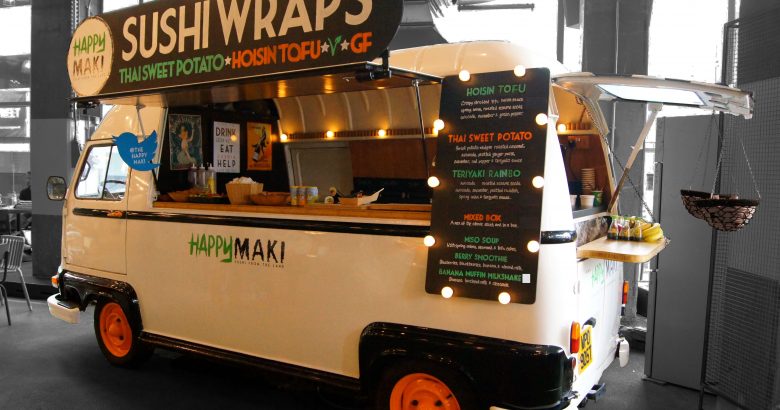 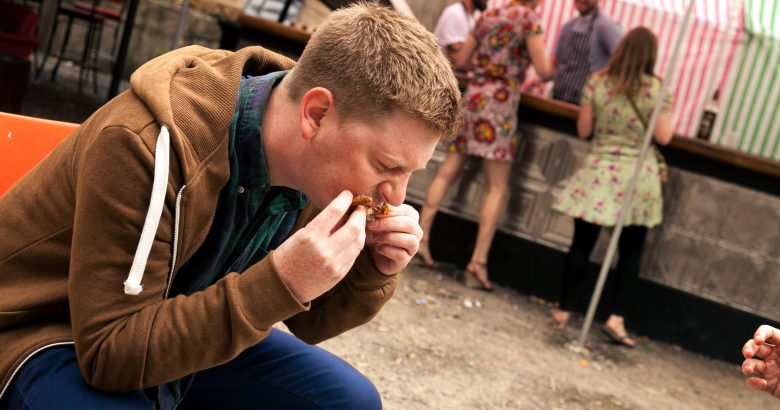 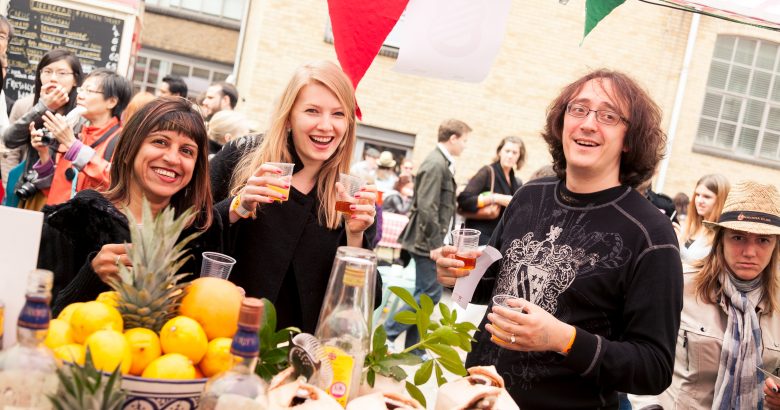 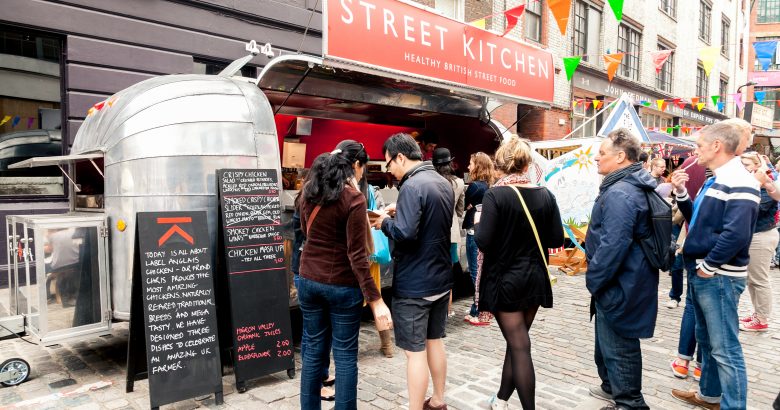 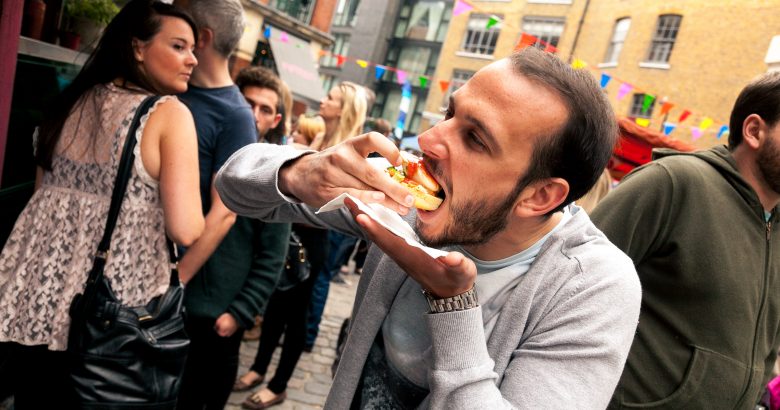 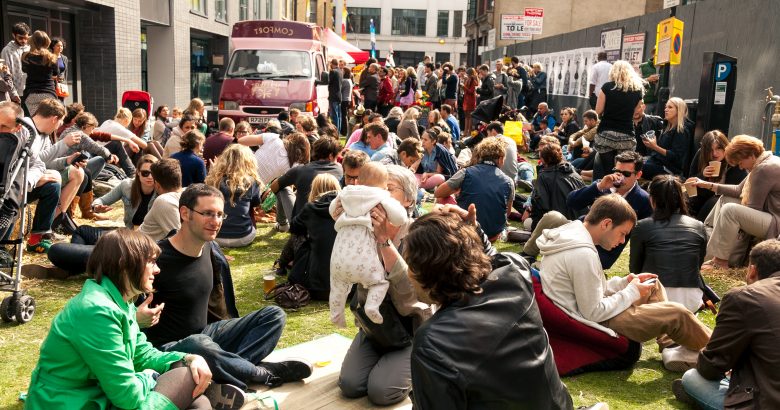 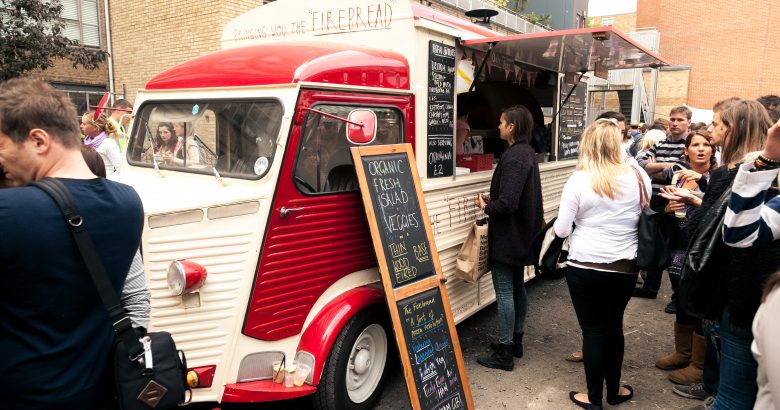 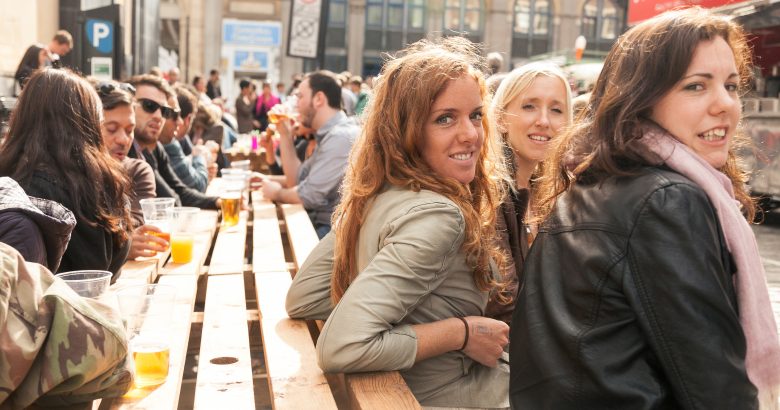 The British Street Food Awards 2016 Northern Heats head to Leeds Dock on 25 & 26 June to coincide with The Waterfront Festival.

Richard Johnson, award-winning food journalist and broadcaster and founder of the British Street Food Awards guides you through the operators hoping to win your vote.

There is pizza (the pizza you order on a Friday when you’re too tired to cook or pick up out of your supermarket’s freezer) and then there’s pizza. The real stuff, out of a wood-fired oven, served with a bottle of something cold, overlooking the Bay of Naples. Oh, and then there’s the kind of pizza that comes out of a steam train. Ladies and gentlemen, I give you Pizza Loco. From Leeds. Italian on the bottom, Yorkshire on’t top.

It was a baptism of fire – literally. The first Man Meat Fire gig, at a Christmas market in Lancashire. “We arrived bright-eyed and bushy-tailed at 7am after a 2 hour journey and were told to set up our gazebo smack bang in the middle of the market square. As we started unloading the van, dark clouds appeared from nowhere, followed by sideways hail and the formerly strong winds turned gale force. To our credit we got our gazebo up, anchored down by some heavy duty sand bags and watching all the other traders admit defeat and pack up to go home, we patted ourselves on the back for coming prepared. We’d just got the BBQ smoker fired up when the direction of the wind changed, creating what, with a little exaggeration, could be described as a tornado in the market square. The main event marquee lifted off and somersaulted through the air past us to land on the roof of a nearby building. Sam still didn’t want to give up, we’d ordered loads of stock, she’d spent the week before organising and preparing everything to perfection and point blank refused to pack up until one of us found another venue to set up at. But events were being cancelled left right and centre due to the weather and we thought we’d have to pick Sam up and strong-arm her into the van. Then Gareth came up with a bright idea, one he has a lot come to think of it! “Let’s go to the pub”. Our fabulous local came to the rescue and we ended up having a brilliant impromptu weekend selling food to customers in the pub. Way to go!”

There’s no neatly-pressed table cloths. No silver cutlery, polished on a waiter’s cuff. But otherwise it’s a full-on restaurant experience at Shoot The Bull. Chris the chef has had years of experience working in the industry, including The Hand & Flowers — the only two star pub in the world – and the Fat Duck. It shows. We brought him in on a job to showcase the finest English lamb and cannot WAIT to see what he produces for the heats.

Once the hatch opens, team KerbEdge flip the best burgers this side of the Atlantic. Their words, not ours (but we hear people say as much whenever we book Cyril the H van into Trinity Kitchen). But how will their handmade burgers (using chuck steak mince from locally reared Limousin cattle supplied by Riverside Butchers of Stamford Bridge) stand up against the opposition at the British Street Food Awards? Check this out.

Well Hung are all about the very best of British steak. James and Heather (the butchers of the team) source the best beef in the local area and then age it, in-house, at the Well Hung butchery. The 28-day flat iron they use in their Philly Cheese steak sandwich is the stuff of legend, and their SLJT — a New York Bagel topped with steak, lettuce, jalapeños and tomato – has been known to stop traffic in Manchester. THIS JUST IN. Top secret new dish to be launched at The British Street Food Awards Heats!

Sue Chiu-Fan Lee was born in Hong Kong and worked in the family food business as soon as she was old enough to reach the till. She’s now all grown up, and cooking authentic dim sum, gua bao, wontons and spring rolls for discerning customers in the North West of England – exactly the same way her family did back home.

John Wallace was a high-end restaurant chef for 10 years, working 80 hours a week. Since he’s taken his bao and gyoza to the streets, life has changed. “I get to meet people who aren’t chefs, and I can watch my kid grow up. Don’t get me wrong — I still work hard. But it’s on my own terms. It’s been the best decision I’ve ever made.” John’s secret ingredient? Kimchi juice — the juice left at the bottom of the bag of dumplings. “Priceless” says John. “Bright red, garlic and ginger flavoured. Salty, sweet and I put it on everything. It’s a massive perk of making large amounts of kimchi!”

Jimmy Khor is a big mouth. An old-fashioned street hawker who can sell anything to anyone. But it makes it easier when the ‘anything’ is his Nasi Lemak, a fragrant Malay rice dish cooked in coconut milk and pandan leaf. Jimmy’s signature dish is actually his Rempah Chicken, which is a curry battered boneless fried chicken served with sambal sauce, and Ikan Bakar or banana leaf cod. But he hasn’t written his heat menu yet — he won’t put chalk to a-board until he’s checked out what’s good at the market…

James, CEO over at Fat Annies, gave up a respectable office job in 2014 to serve hot dogs. Hot dogs specially made for him, with his own sauce, kraut and topping. Now his authentic dog experience (based on research in New York) is changing the world. Well, Manchester at least. Check this out.

Ten years ago, Mudassar Amjad and his brother Tayub set up a small 10-cover restaurant in Bradford. But they still insisted on trading at small melas and local street markets. From a trike. It helped perfect their chicken tikka marinade (“our secret weapon” says Mudassar). As they love what’s happening in Britain, their favourite place for street food is India. “It’s completely effortless” says Mudassar, “and not like you’re being sold ‘culture’.”

Simplicity is the most difficult of all concepts. That’s what they say. But Cow Boys are doing just fine with a stripped back menu of single, double or triple burgers made from 21-day-aged Hereford beef, in locally-baked buns, topped with American cheese and James’ own-recipe sauce. Sometimes, just for the hell of it, they will put Krispy Kreme donuts on the menu, sandwiched with beefburgers and melted cheese. You have been warned….

Callum is a chef. Mel has a background in marketing and design. They fell in love, and set up a really well designed food business. Crème brûlée was originally going to be the dessert option to complement something savoury but they saw a niche and decided to start the UK’s first crème brûlée van. It all clicked into place when they spotted a vintage Renault van whilst working in France. They bought Florence in May 2014 and The Crema Caravan was born! And they always “Burn to Order! Winner of Best Dessert at the British Street Food Awards 2015 (check their rosette in the picture above) but they want to go one better and win Best Of The Best in 2016. Most unusual request? A vegan crème brûlée — made with tofu. “No offence vegans, but…..”

Pete Hewitt from Nottingham was a Masterchef finalist in 2015. And yet his real passion is for more informal dining – what he calls “the bread and butter, the everyday eatin.” So he imported himself a van from the US and set up Homeboys, specialising in Japanese soul food. Expect a strong veggie menu (braised aubergine donburi with soy cured yolk, pickels and tempura sauce) and meaty classics such as karaage and pickles – Japanese fried chicken.

The Pickled Porker trade from the Pig Shed. It’s a one-off – part Basque cider house and part Yorkshire pub – and a place where you can sit down and enjoy Yorkshire craft ciders with low and slow meats on brioche, or a Yorkshire tapas board with two or three dishes to share. Not that you’ll be doing a lot of sharing. With cider-glazed Yorkshire chorizo and fennel seeds on the menu, and cider-braised pork cheeks with rosemary and white bean smash, why on earth would you share?